In need of capital to start a new business or fund a creative endeavor? Crowdfunding websites such as Kickstarter, GoFundMe, and Indiegogo have exploded in growth and popularity and are spreading like wildfire for both individual fundraising and small business owners. The amount of funding being crowdsourced has risen exponentially since 2009, and will likely double to more than $ 6 billion this year according to some experts. Kickstarter alone is on pace to triple. 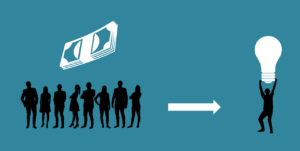 Crowdfunding has found a home among filmmakers who are in need of cash to get their Indie films produced. I suppose that should come as no surprise since it was those in the creative arts community who first turned to crowdfunding. Take filmmaker Ryan Koo for example. In the Fall of 2011, Mr. Koo announced his debut feature, “Man-child.” Embarking on an ambitious Kickstarter campaign, Koo raised $ 125,000, which became the most funded project in Kickstarter’s narrative film category – for just one day!

This demonstrates the upside of crowdfunding — that it is about democracy, and that through that great underpinning of American society it’s possible to raise the money you need when you don’t have two pennies to rub together. Koo’s project is the poster-child of that. The “crowd” clearly wanted to give it to him and they voted with their wallets.

Before you start pumping your fists in the air to celebrate, there is also a downside. Just like where there is smoke there is fire, where there is cash it is a safe bet that the IRS is hot on the trail. Not surprisingly, the IRS considers crowdfunding money taxable income. This blog will walk you through what you need to know so you don’t step in any minefields along the way.

A short history of crowdfunding will help us back our way into this topic. As a preliminary matter, crowdfunding is a way to fund a project by gathering online contributions from a large group of backers. Crowdfunding was initially used by cash-strapped musicians, filmmakers, and other artists (i.e., “starving artists”) to raise money for projects that would otherwise not see the light of day but for generous donations from the public. Sadly, these projects do not have much to offer contributors insofar as money is concerned since they are unlikely to turn a profit. But that is not what motivates people to contribute. Instead, it is the tremendous satisfaction they feel in helping to ensure that a transformative film that informs, inspires and entertains is brought to life on screen for the public to see.

Today, crowdfunding includes a myriad of projects, events, and products. In fact, it has even become an alternative to venture capital.

Because securities are involved, equity crowdfunding is regulated by the Securities and Exchange Commission (SEC) and imposes strict requirements on issuers. For example, the rules limit the amount of money an individual investor can invest, impose disclosure requirements on issuers for certain information about their business and securities offering, and require issuers to raise capital through an SEC-registered intermediary, such as a broker-dealer or a funding portal.

If you’ve been following along up until now, hold onto your hats. This is where things can get confusing. But first, a few bright-line rules. The person who establishes the crowdfunding account is called the “agent.” As the agent, you are the person who receives the money. In other words, the money goes directly to you. However, just because you are the agent does not automatically mean that you are the beneficiary of the funds. If you are both the agent and the beneficiary, the rest is a piece of cake – it is your obligation to report the income.

If you are acting as an agent on behalf of a beneficiary who is someone other than yourself, then you have no obligation to report the income. Instead, the funds are taxed to the beneficiary when paid. To avoid any confusion, it’s helpful to define your role right from the start, when you first set up a crowdfunding account. Be sure to specify who you are setting up the campaign for – you or someone else.

As the beneficiary, any and all income received, regardless of the source, is treated as taxable income – including crowdfunding dollars. However, money donated or pledged without receiving anything in exchange (i.e., in absence of a “quid pro quo”) is excluded from gross income if it qualifies as a “gift” under the gift rules of the Internal Revenue Code. Gift recipients do not pay any tax on gifts. Up to $15,000 per year per recipient may be given by the “gift giver” or donor.

Reward-based crowdfunding can present its own challenges. A quick and dirty example of reward-based crowdfunding will help you avoid any traps. Suppose you are a filmmaker who wants to produce an Indie film but are short on funds. You run a Kickstarter campaign to raise additional funding, setting a goal of $15,000 and offer a small gift in the form of a t-shirt, or if you’d prefer, a coffee mug with a logo or a bumper sticker to your donors. Your campaign exceeds your wildest expectations and shatters your fundraising goal two times over. Instead of raising $ 15,000, you raise a whopping $35,000.

Taxable Sale. Because you offered something (a gift or reward) in return for a payment pledge, there was a “quid pro quo” exchange. Thus, it is considered a sale which may be subject to sales and use tax.

Taxable Income. Since you raised $35,000, that amount is considered taxable income. But even if you only raised $15,000 and offered no gift, the $15,000 is still considered gross income and must be reported as such on your tax return–notwithstanding the fact that you did not receive a Form 1099-K from a third party payment processor.

The black-letter law for crowdfunding is that crowdfunding revenues must be included in gross income unless they are:

There are a number of factors that impact which expenses are deductible against crowdfunding income. The most salient ones include whether the business is a start-up and which accounting method you use (cash vs. accrual) . For example, if your company is a startup you may be eligible for such enticing tax benefits as deducting startup costs or applying some or all of the research and development credit against payroll tax liability instead of income tax liability.

How Do I Report Funds On My Tax Return?

Typically, companies that issue third-party payment transactions such as Amazon if you are using Kickstarter or PayPal if you are using Indiegogo must report payments that exceed a threshold amount of $20,000 and 200 transactions to the IRS using Form 1099-K, Payment Card and Third Party Network Transactions.

Reporting thresholds in excess of $20,000 and greater than 200 transactions is another animal. They apply only to payments settled through a third-party network; there is no threshold for payment card transactions.

Form 1099-K includes the gross amount of all reportable payment transactions and is sent to the taxpayer by January 31 if payments were received in the prior calendar year. You should include the amount found on your Form 1099-K when determining your income on your tax return, generally, Schedule C, Profit or Loss from Business for most small business owners.

Recall that tax law is not clear-cut when it comes to crowdfunding donations. Some third-party payment processors may classify these donations as gifts. If so, no 1099-K will be issued. This is why it is critical to keep accurate records of transactions relating to your crowdfunding campaign, the least of which should include a screenshot of the crowdfunding campaign and receipts of any money transfers. Keep it mind that the IRS may not come knocking at your door tomorrow. It may take several years before they catch up to you. Generally speaking, the statute of limitations on assessments is three years but there are enough exceptions to the general rule to all but swallow it up. For this reason, it is important to retain important tax documents for extended periods of time (I recommend at least six years) in much the same way that you retain important travel documents such as your U.S. Passport, your driver’s license, your vehicle registration, and your auto insurance.

If you’ve set your sights on crowdfunding to raise money for your small business or startup or for a personal cause, it wouldn’t hurt to speak to a tax professional to ensure that everything is in order. Also, be careful not to get caught in the unpleasant position of spending all of your crowdfunding dollars on your project without setting aside a reasonable amount to pay your taxes. This will alleviate the fear and anxiety that we all experience when a tax bill arrives and we don’t have the money to pay it.